skip to main | skip to sidebar

This one is for Julia, mother of my child, love of my life , best friend and sharer of great tunes. 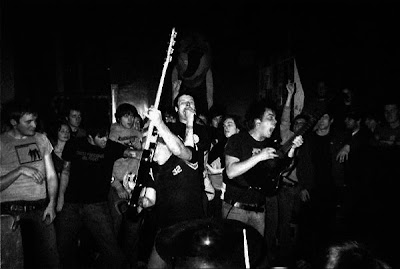 I got The Great Redneck Hope's 10" 'splosion! 5 or 6 years ago and totally loved on it hard. I am not normally into stuff like this. You know, the manic, crazy, tech, grind stuff with chug parts but TGRH are far superior to anything in the genre of "techgrindorwhateveryoucallit" stuff. They just fucking rip it up and hold their own! More recently (well like 2 years ago) I got the "Behold the Fuck Thunder" 1-sided 12" and again was blown away. At the same time I got their first 7" "Why Humans Think Computers Can’t" which is terrible at least from my point of view. They had obviously not found their sound yet, it truly shows.

TGRH really just seems to love what they are doing and really just seem to be having fun. I am sure other than the musicianship being incredibly focused, they don't take themselves seriously like most of these techy bands do. Their song titles say it all, 100% jokes. I have put both the 'splosion! and Behold the Fuck Thunder! to download below.

Here is a live set or at least I think it is a whole set in two parts:


Here is some info I have found about The Great Redneck Hope:
2000-Present. The Great Redneck Hope (TGRH) formed in 2000 with only Dan Harvey and Jeremy Grobsmith as the only members. After writing a 7 song set they played their first show, recruiting their original vocalist Derek Barnett only 1 day before the first show. After that show Aaron Retka joined the band as the bass player. Aaron Retka then recorded a 3” demo, which sounded pretty bad, and they toured on it for some time. They then released “Why Humans Think Computers Can’t” (recorded by porkchop of Catheter fame) which showed a primitive TGRH with vocalist Derek Barnett not yet perfecting his vocal style. That album formed the basis of TGRH’s sound and in 2003, they released “‘Splosion” (recorded by Stan Wood at Volume Studios Chicago, IL) which featured 9 songs with a more perfected vocal attack and increased musicianship but sub-par recording quality. After extensive touring through out all recordings, they released “Behold The Fuck Thunder!” which was recorded at God City (Kurt Ballou of Converge fame) and reflects the bands most polished instrumentation and best recording quality. After much touring after “Behold…” Derek Barnett parted ways with TGRH and they adopted a new vocalist, Bradley Roach. They toured a few more times and played SXSW with Bradley Roach but never recorded with him. After their winter 2006 tour, bassist Aaron Retka left the band and The Great Redneck Hope went on hiatus looking for another bass player. They played local shows for a while after finding a new bass player until sadly going on haiatus in early 2007.

Here are the links to download some rippin' TGRH releases:
Link to 'splosion!
Link to Behold the Fuck Thunder!
Posted by Unexpected and Undisposable Enthusiasms at 9:44 AM

That is me; Greg!